How to Trade with PSAR MACD and EMA 200: Step-by-step Guide

An edge in determining the entry and exit levels is crucial for a successful trading career in the financial markets. Indicators are the tools that accord technical analysts the advantage in identifying ideal trading opportunities. While there are hundreds of technical indicators, some stand out on their ability to generate reliable trading signals. However, some generate much more reliable trading signals when combined with others.

The Parabolic Stop and Reversal (PSAR), the Moving Average Convergence and Divergence, and the Exponential Moving Average are some indicators that stand out when combined to generate trading signals.

The Parabolic Stop and Reversal Indicator

The most popular technical indicators are the ones that indicate the start of new trends. Such tools allow traders to get in early in the emerging trend and ride the wave before sentiments change. Nevertheless, some indicators provide early warning signs of a potential change in the direction of price action.

Likewise, if the price were increasing, the PSAR dots would be expected to always be below the candlesticks. However, as the dots emerge above the candlesticks, it affirms a change in momentum from bullish to bearish. Consequently, it implies the end of the uptrend and the start of the downtrend.

How to Use PSAR to Exit Trades

The chart below shows Bitcoin’s rally at the height of the crypto boom in 2017. As the price raced to record highs of the time, the PSAR indicator was always below the candlesticks affirming the buy signal as part of the bullish momentum. 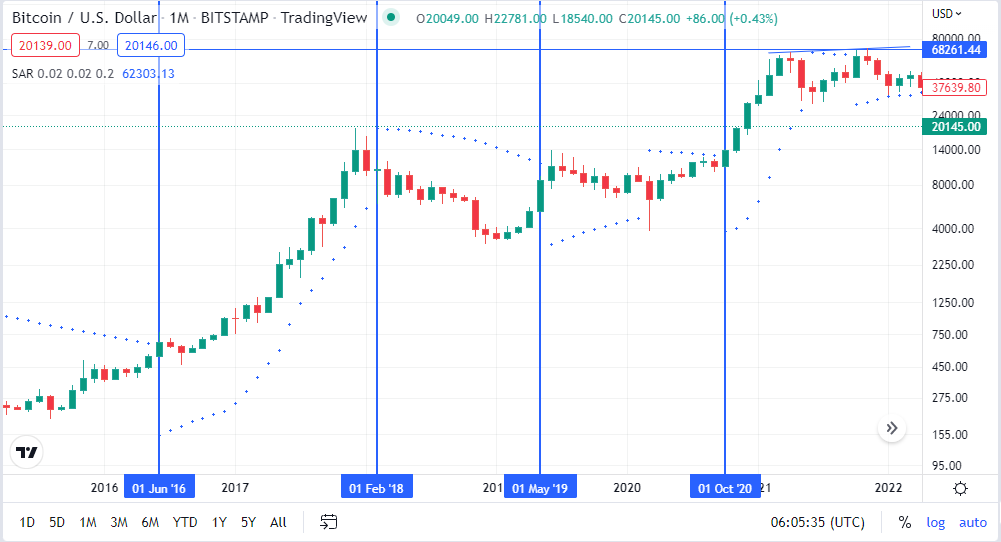 However, as 2018 started, the upside momentum showed signs of weakness. As soon the PSAR indicator dots emerged above the candlesticks, traders who were long the flagship cryptocurrency exited their position as the indicator affirmed the end of the uptrend. In addition, the dots above the candlesticks confirmed a change in momentum from bullish to bearish.

With the PSAR dots below, Candlesticks in March asserted the end of the downtrend, signaling the start of the uptrend. Consequently, traders short the market exited their sell positions as the price increased.

THE Exponential Moving Average of 200 is a moving average set with a period of 200. Traders use the indicator to identify the underlying trend or the direction of price moving at a given time. In addition, the technical indicator allows traders to identify trends as they start and exit the market whenever there is a trend reversal.

The steeper the EMA 200 is, the stronger the trend, either to the upside or the downside. On the other hand, whenever the indicator is flat, moving sideways implies the market is in a range with bullish and bearish momentum at equilibrium.

Consequently, traders resorted to opening buy positions with every slight pull back. 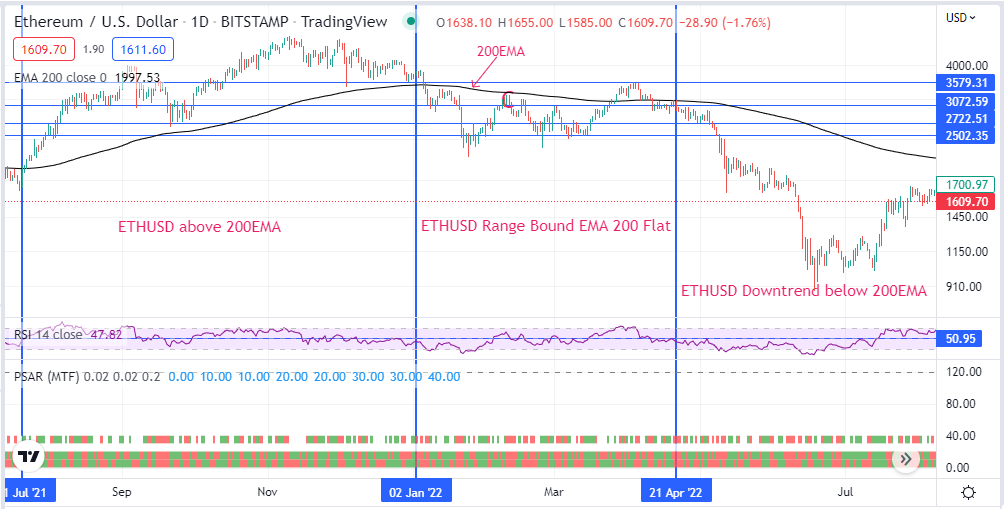 In early January, the price moved below the EMA 200 and broke out of the uptrend. However as short sellers tried to push prices they experienced strong resistance from bulls who pushed price back up. The back and forth between buyers and sellers resulted in ETHUSD remaining range bound.

Eventually, short sellers overpowered bulls in April 2022 resulting in price closing below the EMA200 and edging lower with force. Every time that buyers tried to fuel a bounce back they came under pressure with ETHUSD tanking significantly.

The Moving Average Convergence and Divergence is a moving average indicator used to provide insights on the underlying trend and the direction in which the market is likely to move. It consists of two moving averages.

In addition, the histogram shows the strength of the momentum either to the upside or the downside.

The MACD working principle is straightforward. Given that there are two moving averages with different speeds, MACD is a reliable indicator for predicting new trends. For instance, whenever the faster moving average or the MACD line crosses and moves above the slower moving average or Signal Line, it implies the start of an uptrend.

The MACD line moving away from the signal line affirms a buildup in buying pressure. During the uptrend, the histogram will appear above the zero line and increase in size as the bullish momentum increases.

In contrast, whenever the MACD line moves below the Signal Line, it implies the start of a downtrend. The MACD line moving further away from the signal line asserts the buildup in the selling pressure. In this case, the histogram will appear below the zero line and increase in size to the downside as the downward momentum increases.

How to Trade Using MACD

The chart below shows the MACD indicator below the EURUSD chart. The graph clearly shows that whenever the faster-moving average moved above the slower-red-moving average, it marked the start of an uptrend. 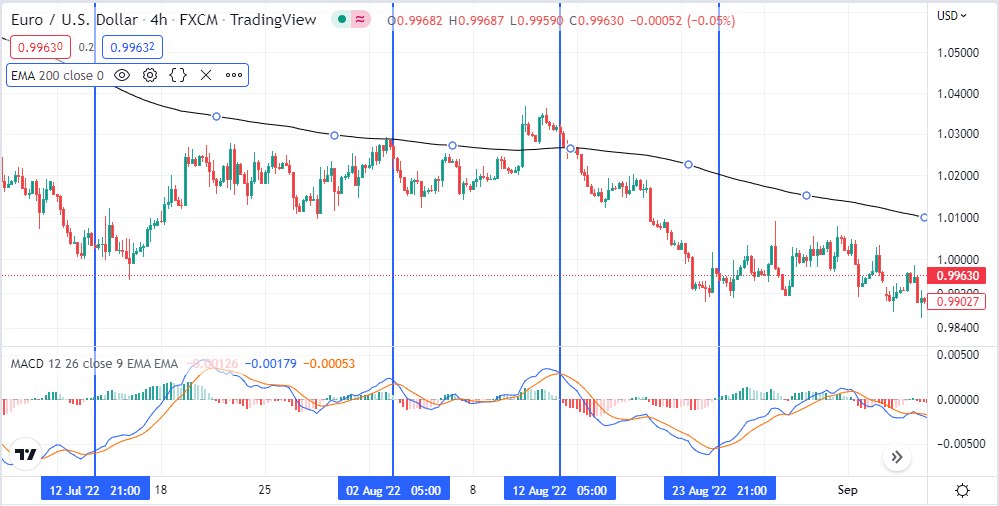 Similarly, the MACD asserted the start of a downtrend when the MACD line or faster-moving average crossed the Signal line or slower-moving average and started moving lower. The size of the Histogram below the zero line increased as the downward momentum increased. Likewise, the histogram size decreased below the zero line as soon as the downward momentum faded.

Using the PSAR, MACD, and EMA 200 indicators concurrently increase the prospects for the best trading signals. In this case, the MACD and EMA 200 would provide reliable signals on the start of a new trend, while the PSAR would give early warning signs of a potential trend reversal needed to exit a given position.

A trading setup incorporating the three indicators would always lead to some of the best trading outcomes.

A buy signal would only come into play whenever the price rises above the EMA 200, as it affirms the market is trending up. The chart above shows that Tether is above the EMA 200 moving average, proving that bulls are in complete control. However, that does not mean one can open a buy position at any given point. In this case, the PSAR and the MACD are relied upon to pinpoint the ideal levels to open long positions.

A perfect entry level for a long position would come into play when the Blue MACD line moves above the Red Signal Line in the MACD indicator. The crossover underscores the start of a new uptrend even if the EMA 200 affirms the market is in an uptrend. The PSAR dots appear below the candlesticks when the MACD crossover occurs only goes to confirm the start of the uptrend.

A trader can remain long if a price is above the PSAR dots. However, as soon as the PSAR dots emerge above the price, it implies the end of the uptrend. Consequently, this would be the best time to exit the market. The MACD line moving below the Signal Line only goes to affirm the end of the underlying uptrend.

Likewise, with the help of the PSAR EMA 200 and MACD indicator, it is possible to ascertain ideal levels to enter short positions.

Once it is clear that the market is in a downtrend, the next step is identifying the ideal levels to enter sell positions. With the EMA 200 acting as a strong resistance level, any price bounce back to the EMA should always be a point of interest. Whenever the price is near the EMA 200, traders should always look to enter short positions if it does not move above.

Whenever the price fails to move above the EMA 200, the focus should shift to the MACD indicator for a sell signal. The chart above shows that at about 1100 hours, the MACD line Blue crossed the Signal Line Red near the EMA 200. What followed is the price moving lower. The PSAR confirmed the end of the previous uptrend by moving above the price.

Consequently, traders should always look to enter short positions if the price is below the EMA 200, the MACD line crosses the Signal Line from above and moves lower, and the PSAR dots are above the price.

The MACD, PSAR, and EMA are some of the best technical analysis indicators for gaining an edge in predicting price action. The EMA affirms the direction the market is likely to move while the MACD asserts the ideal entry levels to open positions. On the other hand, the PSAR provides warning signs on the perfect time to exit.

TradingWolf and all affiliated parties are unknown or not registered as financial advisors. Our tools are for educational purposes and should not be considered financial advice. EZTrader is not a part of our company. Results in the past are no guarantees for the future. Be aware of the risks and be willing to invest in financial markets. TradingWolf and the persons involved do not take any responsibility for your actions or investments.